Samantha Power, won a Pullitzer Prize for her book “A problem from hell: America and the age of genocide”. A keynote speaker at the International Film Festival on Human Rights in Geneva, she spoke to InfoSud’s Claire Doole about the US’s response to the genocide in Darfur, in western Sudan. 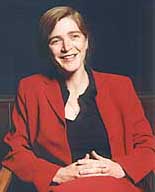 The US House of Representatives has called Darfur “genocide” and the Deputy Secretary of State, Robert Zoellick has been there several times. Why is the US so engaged?

Well, some people think it is some sort of anti Islamic fervor, but I find that rather simple-minded. It is after all a Muslim government killing Muslims not Christians. The reason the US has become more engaged is due to the sustained activism of Christian and student groups as well as Congress. They have put so much domestic pressure on the Bush administration that they have succeeded in extracting a reaction.

What has prompted this groundswell of concern?

One of the virtues of the American people is that they have a moral receptivity to human suffering. Americans give the more per capita to private charities than anyone else in the world. There was a lot of guilt over the genocide in Rwanda, when the US stood by, and so Darfur, where people are again being targeted on ethnic grounds, really hit home.

Is the US though the right country to push the international community to act on Darfur? Hasn’t it been discredited by its own human rights record ?

Yes you are right. The US public is pushing the one country that is not qualified to show moral leadership. Under the Bush administration the US has behaved as the most arrogant and remorseless bully the world has seen in half a century. In Iraq, we lied about why we went in and lied about the torture going on in the jails, so it is not surprising that on Darfur, people outside the US roll their eyes or start talking about an anti-Islamic agenda.

The US and EU proposal for the UN to take over from the African Union in Darfur has been rejected by the Union, what consequences will this have?

Like many missions, it is muddling through with too few troops and a weak mandate. It certainly did not help that the US and EU proposal was seen as a public rebuke that it was not up to the task. I worry that all of this will mean more African Union casualties.

How serious do you think anyone is about ending the violence? I don’t think anyone is serious. The alibi of the African Union has been exposed as a chimera, and ultimately, although western countries are prepared to lament the outrages, they don’t want to go and do this work. If you can make an economic and strategic link in a crisis, there is a chance you will get countries to act but otherwise it is just going to be a humanitarian response with aid and shelter.

How concerned are you that Darfur will go down in history as a genocide that the world did nothing about?

I think this will be the case. It is a slower process than Rwanda. Rather than months, it could go on for many years. The problem is that Darfur has the feeling of a chronic crisis so it is hard to muster support for action. I do think that the historians - when judging the world’s response - won’t be terribly forgiving