Capture puts ex-warlord in jail, Liberia in a bind

WASHINGTON - Advocates welcomed former Liberian strongman Charles Taylor’s capture as a blow against impunity for war crimes but braced for political fallout from U.S. involvement in the affair.

Taylor, an ex-warlord and president, is to stand trial nearly three years after a U.N.-backed court indicted him on 17 charges of war crimes and crimes against humanity for his alleged role in West African massacres.

Many observers said Taylor’s capture could aid peace and stability in Liberia as it claws its way back from more than two decades of civil war.

However, some also decried the timing, saying Washington had bullied the fledgling government of Liberian President Ellen Johnson-Sirleaf into pressing Nigeria to extradite Taylor, and had held the Liberian people hostage by threatening to withhold economic life support if Johnson-Sirleaf did not push the issue.

Johnson-Sirleaf’s government, in power since January, had sought to bring Taylor to justice after tackling the country’s moribund basic services, 85 percent unemployment rate, and crushing HIV/AIDS crisis. Pushing it to deal with Taylor first could wrinkle the country’s fragile peace, they said.

Taylor spent nearly three years in Nigerian exile and became the world’s highest-profile fugitive Monday night, when he disappeared from his seaside mansion. Nigerian officials said border guards detained him Tuesday night as he attempted to steal into neighbouring Cameroon.

Taylor was repatriated Wednesday and then flown to the U.N.- backed Special Court for Sierra Leone in Freetown, according to U.N. news sources.

"The wall of impunity has been washed away," said David Crane who, as the special court’s chief prosecutor, wrote Taylor’s 2003 indictment.

Crane, now a law professor at Syracuse University, brushed aside concerns that Taylor’s extradition could undermine the power of exile as an inducement for dictators to relinquish power.

A small army of fighters

Taylor agreed to quit Liberia in 2003 because he received an offer of safe haven from Nigeria, Crane acknowledged in a radio interview here. But once Taylor was indicted as a war criminal, Crane added, Nigerian President Olusegun Obasanjo was obliged under international law to hand him over.

Some also saw Taylor’s capture as averting a potential new crisis in Liberia, saying that he would have ramped up efforts to destabilise the country and discredit Johnson-Sirleaf had he given Nigerian authorities the slip and established a new base of operations.

Taylor maintained a small army of fighters in the countryside and supporters in key public offices — including his wife, a legislator. He and some of these supporters had admitted they were in frequent touch. Thus, the former ruler remained a destabilising influence over Liberian politics even from exile, said Suliman Baldo, New York-based Africa programme director at the International Crisis Group.

The ex-warlord’s "being put away means that his ability to manipulate and agitate for his own sake would be very seriously curtailed," Baldo said.

Taylor’s handover came after Johnson-Sirleaf asked Obasanjo to extradite him. Relief at the successful extradition was tempered by what some saw as unreasonable U.S. pressure on Monrovia, however.

"Clearly, a hammer was being used on the Liberian government," said Emira Woods, co-director of Foreign Policy in Focus at the Institute for Policy Studies, a Washington think tank. "There was a clear link between development assistance for the people of Liberia and actual extradition."

Several political and media analysts described U.S. Secretary of State Condoleezza Rice as single-minded in her pursuit of Taylor, adding that some lawmakers also had trained their sights on him. 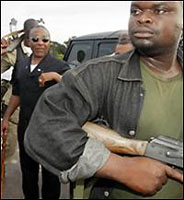 The wall of impunity has been washed away

U.S. impatience over Taylor appeared to be driven in part by disgust at his reputation and in part by allegations he had harboured al Qaeda suicide bombers.

Perhaps more significantly, the Bush administration has been eager to see a major despot brought to swift justice by a judicial panel other than the Netherlands-based International Criminal Court, to which it stands firmly opposed, the Christian Science Monitor newspaper quoted Ayesha Kajee of the South African Institute of International Affairs as saying.

When it looked like Obasanjo might be dragging his heels - and especially when it emerged that Taylor had gone missing Monday night- the Bush administration brought its diplomatic cudgels to bear on Abuja, including threatening to cancel Obasanjo’s long-awaited trip to Washington.

Obsanjo confronted with an insurgency

Taylor’s extradition cleared the way for the visit to go forward as scheduled on Wednesday. Obasanjo thus dodged a political bullet he could ill afford amid opposition to constitutional amendments that would allow him a third term in office. Additionally, he is confronted with an insurgency that has cut off one-fourth of oil production in the country’s Niger Delta region, a major U.S. supplier.

Johnson-Sirleaf, Africa’s much-trumpeted first female head of state, might not prove quite so lucky.

Her government won election last November on the strength of promises to improve the economy, health, and education services before turning to Taylor.

By catapulting Taylor to the top of the list, Washington appears to have exposed Johnson-Sirleaf to the political fallout of a Taylor trial without giving her time to make good on campaign promises and establish her own credentials as a provider of government services.

This when the country lacks an army following disarmament and demobilisation that have spawned new misgivings among old enemies, and even as Liberians pin their hopes of justice on a nascent, homegrown truth and reconciliation commission.

Instead of allowing the new Liberian government to tackle its problems and consolidate peace on its own terms, "the Bush administration, kind of like a bull in a china shop, said, ’Well, you do this and do this now according to our timeframe’," Woods said.

Even so, Bush told Obasanjo before reporters at the White House Wednesday that "the fact that Charles Taylor will be brought to justice in a court of law will help Liberia".